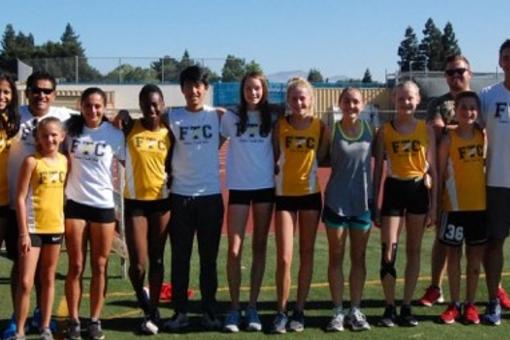 Over 2,000 athletes, aged 8-18 from across the country participated in the national championship.

"It was incredible to have so many of our FTC athletes competing on a national stage, and I'm immensely proud of all of them" FTC head coach Jorge Quero said.

From the FTC team, Tomas Kersulis of Pleasanton made it to the finals of the 400-meter (boys 17-18 age group) and placed eighth, running a personal record of 49.11 seconds in his semifinal qualifier in the event.

Other FTC athletes competing included Isela Ochoa (400 hurdles) in girls15-16, and Arjun Kasthuri and Lesly Townsend competed in their respective 13-14 age groups for the triple jump and high jump.

In boys 13-14, Bibek Das ran the 400-meter and also competed in the 4x400 relay with teammates Wyatt Sattley, Ronit Prakas and Jackson Chandler.

​​The Falcon Track Club recently returned from the U.S. Track and Field Association's National Junior Olympic Championship meet that was held in Greensboro, N.C. at the end of July.

Last year, the FTC had just four athletes qualify for nationals, but this year the team more than tripled that number and qualified 13 athletes for this national level meet. There were over 9,000 youth athletes from ages 8-18 competing in the meet, which was held over a seven-day period.

The four compete for FTC Track, a Pleasanton-based youth track-and-field club for boys and girls aged from 7-18.

There were over 10,000 athletes competing at nationals, which were held over a six-day period the week of July 24. The stadium holds 8,000 fans and was full most of the time.

Barron finished 31st out of 62 competitors with a time of 2:38.90. She just turned 11 years old two weeks ago, but with the birth dates allowed in her age group, she had to compete against girls that were up to two years older. Barron also started competing in NorCal USATF meets in just the last couple months when she joined the FTC Track Club.

Swadley jumped 28 feet 3.5 inches, finishing 44th out of 62 competitors. Last year was Swadley's first year of doing track, and she also competed in NorCal USATF meets via FTC Track Club. She was also in the younger portion of her age group.

Aduaka also competes on the Foothill track team, and this past spring qualified to compete in the 400 in East Bay Athletic League championships as well as advanced to Tri-Valley Championships and the Meet of Champions.

"For the high school athlete looking to play a collegiate sport, faster is always going to be better," explains Quero, who has been track and field coach at Foothill High for six years. "Baseball, football, basketball -- all of these sports want speed, but they don't teach their players how to get faster."

The answer, says Quero, is track, the unsung hero of high school sports. Quero believes track is an underutilized key to reaching the lofty goals these high school athletes envision for themselves."The clubs like Ballistic and Rage, they teach the best athletes how to play soccer. But the college coaches, they want to know who is fast," he says. "College coaches know how to teach skills to their players, but they don't have time to teach speed. The kids who are fast? College will make them good players."

The techniques Quero engrains in his athletes have been around for many years, basic building blocks for creating a strong foundation in almost any sport. But other sports don't focus on posture and correct running form, little things, Quero says, that make the difference between being good and becoming exceptional.

It's not just the sprinters who benefit.

"In track and field, we teach how to move correctly, how to jump higher, how to improve reaction time," Quero notes. "If you move faster than the other guy on the soccer field, you're ahead. If you can jump higher than the other guys on the court, you're ahead. If you're the first off the line in football, you get more yards. You have three seconds to get from first to second base or you're out. Track can teach you that kind of speed."

Quero points to Griffith Gates, a 2013 Foothill graduate now playing football for the University of Pennsylvania, as an example of a good athlete using track to improve during his primary sport's off season.

"Griff is playing his freshman year of college football in a position he's never played in high school. Because he's athletic, the (University of Pennsylvania coaches) knew Griff would learn to play any position. But because he came out in the spring and worked to develop his skills, he got fast and that's what those coaches were looking for."

​Gates agrees that his seasons of training with the track team gave him an edge in the college playing field.

"Speed is everything in college," Gates says, echoing his former coach's mantra. "College football is completely different from high school football. At U Penn, I watch some of the other freshmen struggling to learn the techniques they are teaching -- things I understand because of track."

Gates began training with Quero in the spring of his junior year, after a summer of football evaluations convinced him that more time on the gridiron simply wasn't going to help improve the areas that were holding him back.

"They told me I was too tight, I couldn't move my hips, I needed more flexibility," Gates recalls. "I had a great mental grasp of the game, but I needed more speed."

All those "problems" had solutions built right into the track program.

"Running track made me stretch, got me flexible, and built explosiveness for getting off the line and making those first few seconds count," says Gates. "No other sport can do that without risking injury. Basketball is physical, I tore a ligament playing baseball, I dislocated my shoulder wrestling. Track is low risk."

​Quero agrees with this assessment, pointing out that much of what is taught and practiced in the track program actually helps to prevent injuries in other sports.

"When you learn the correct form, when you learn to stretch correctly, and when you don't allow yourself to get out of shape sitting around playing video games, you're going to go back to soccer, or football or basketball better prepared to play," he says.

And faster, of course. Faster made the difference for Haley Lucas, a graduating senior who credits her time on the track as a primary reason she will be playing soccer for UC Berkeley next year.

"Speed was definitely important in the recruiting process," Lucas emphasizes. "They liked my fitness and athleticism. Track keeps me in shape, it's the perfect way to cross train."

A true athlete who qualified for multiple North Coast Section events during each of the first three years of her high school career, Lucas sees track as a natural draw for anyone with a competitive nature.

"I love to run, I love the races. It's an individual sport; it's all about challenging yourself to get better throughout the season. When you're out there it's just you, your lane and the clock," she says.

​Quero understands that many of their athletes use track as a cross training tool, and he welcomes the opportunity to help them realize their full potential. Quero is sometimes frustrated by the resistance he feels from coaches of other sports, as though training with the track team could hamper an athlete's future, though Haley Lucas, Griffith Gates and plenty of other collegiate athletes who embraced track have proved otherwise.

Conflicts with other sports will always be worked out, he assures.

Because faster is always better.